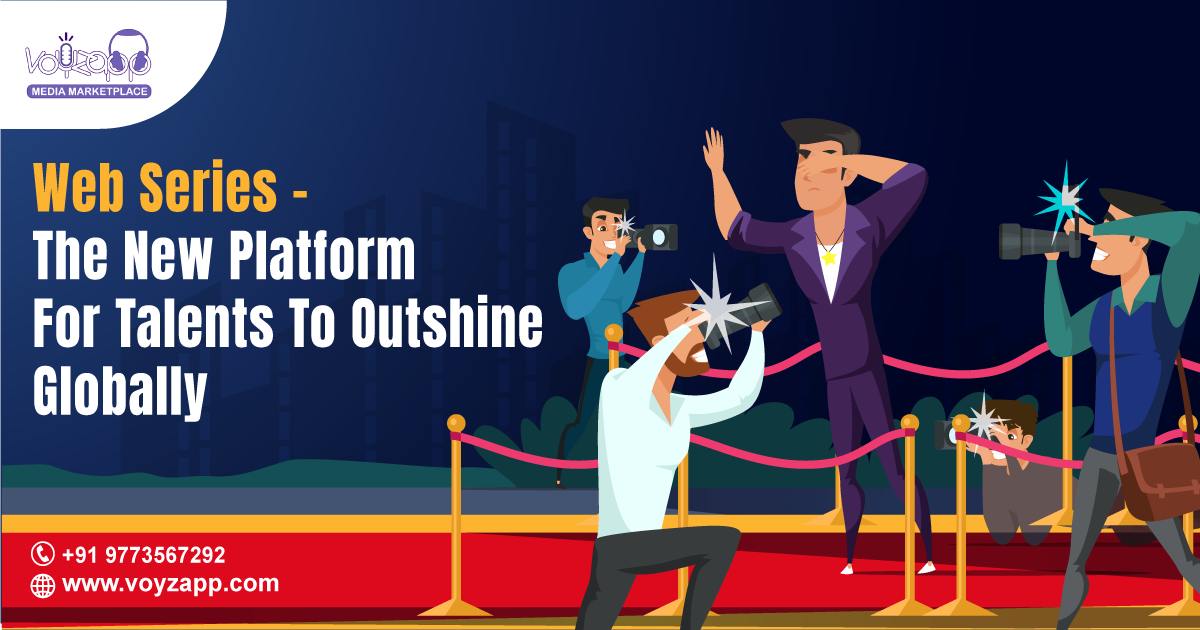 The days of watching television entail hours of aimless channel-hopping with the same old programs playing repeatedly are long gone. The arrival of OTT platforms has almost made television drama serials a thing of the past. This trend has been accelerated by the idea of television crossovers. Web series have a special place in the history of modern entertainment because of how common and popular they have become.

Even during the lockdown period, people moved toward the screen to pass their time. With nothing new on TV, Web Series made an interesting and new source of entertainment for people on Netflix, Amazon Prime, Hotstar, Voot, and many more. These internet streaming services are making people spend the majority of their time these days, killing off televisions in the process.

The web series with their new, innovative, and ground-breaking content are the forerunners of this digital revolution as the audience's attention spans are shrinking and the boundaries of societal norms are expanding. Not only because of their content but also because they are readily available at a reasonable price with handfuls of talents, web series are growing in popularity.

It’s a worldwide platform that supports and offers an equal platform and opportunity to showcase acting, writing, or professional dubbing services regardless of their background, genre, etc., allowing only the work and talent to shine. Digital Cinema App is a brand-new OTT streaming platform with cutting-edge technology, a ton of exclusive features, and a system that changes the way audiences experience media. Finally showing the rest of the world that creators have no shortage of fascinating and captivating stories to tell through web series, creators are now bringing in as diverse, autonomous, and diversified a story as themselves.

OTT platforms are more open to innovation since they offer distinctive and diverse content. On the other hand, television programming is generally the same across all stations. The viewers must limit their viewing to a particular genre. Web series contain all types of genres, including humor, drama, action, horror, and thriller. Youth utilize these services more frequently to binge watch the genres they like best. Owing to the OTT rise, many dynamic Hindi narrators have come up and become celebrities.

When we think about why web series are doing so well among the audience - it’s not only because it's convenient but also because the acting, writing, or voice talent that are getting the chance to outshine are giving their best performance. Finally, we can say that the acting, writing, or voice over talents are appreciated for their work. Web series have altered the entire ecosystem, including the playing field for performers. OTT platforms are assisting a variety of artists in gaining recognition and showcasing their skills to a global audience. The bottlenecks of distance have been eliminated through Over-The-Top. The desire for excellent material has fueled the need for excellent actors as well, people who can do more than just look good—someone who can genuinely play the role. A big group of extraordinarily gifted actors who have hardly ever been profiled or even seen before suddenly appear. Every new online series seems to have performers that have never been seen before, yet are just as talented as seasoned actors.

According to reports, Netflix had close to 150 million customers worldwide in 2019. One can only speculate as to how many customers the pandemic crisis may have added given the monotony of quarantine and the resulting lack of movies and television series being produced; the real numbers now can be huge and talent is getting a chance to be presented in such a huge audience.

Web series have made room for talented and fresher actors to emerge and command attention. Actors such as Pankaj Tripathi, Vikrant Massey, Shweta Tripathi, Pratik Gandhi, Anya Taylor and others have gained immense popularity through web series. OTT has given a chance to all the artists whether actors, voice-over artists, dubbing artists, etc. The internet's widespread use has allowed OTT giants to expand their reach widely, which is the most significant factor and will always be the case.

Online platforms now assist a variety of talented artists, besides actors and writers, to build their reputations, and careers and showcase their skills to a global audience. Through technological advancements, distant obstacles have been removed.

We can say that the era of web series has allowed talented artists to outshine on such big platforms because they deserve it. Voyzapp is world’s largest voice over agency with thousands of professional voice actors who can be booked online, instantly. Visit Voyzapp now and book your media piece online!

5 Key Points To Be Considered While Creating A Documentary