5 Key Points To Be Considered While Creating A Documentary 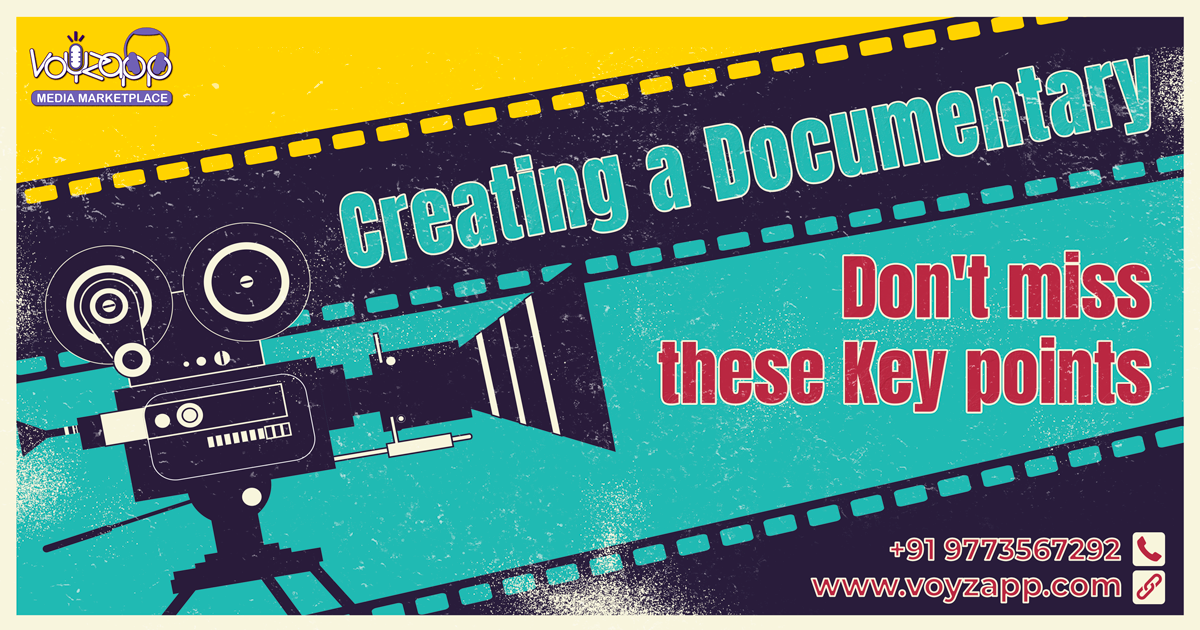 For many people just getting started in cinema and video, the desire is to make indie shorts and big-budget films. However, the narrative film is only one of many alternatives accessible in the industry, as many will shortly learn. Working in other fields, such as corporate video or documentary filmmaking, can sometimes provide you with significantly more exciting and lucrative work. While a documentary is the result of a complete production effort, an engaging documentary voice over is often one of the most critical aspects of a popular Hindi documentary.

Here are some concepts and takeaways to bear while approaching your next narrative production with a documentary focus, whether you are just starting in the field or have worked in documentaries or other areas for years. Transform your documentary equipment and expertise into narrative short and feature filmmaking tools. Take a closer look for additional information.

5 KEY PRINCIPLES TO CONSIDER FOR YOUR NEXT DOCUMENTARY -

USE A VERSATILE CAMERA

The first thing is about your camera and equipment. Documentary filmmaking is chaotic and necessitates a tremendous deal of flexibility on set. You must not only be able to revamp on the fly, but you must also be able to push your equipment to acquire good footage, frequently in less-than-ideal conditions.

We are talking about a camera with a high ISO, good low-light performance, and a wide dynamic range. A decent documentary camera should also have good handed stabilization, long battery life, and simple controls for working quickly and on the go.

You might also think that narrative lends itself to high-resolution images, a lot of light, and cinematic shallow focus compositions. However, while this may be true in big-budget movies, narrative filmmaking is often done with limited resources.

In our opinion, a good and adaptable mid-range DSLR or mirrorless camera, or one of the more cheap cinema cameras that are standard for documentary work, is your best chance for narrative work. You don't necessarily need the most up-to-date, high-end models of many of these cameras. Instead, choose a company with a proven track record for long-term productions. So, whether you are recording a scene involving a seasoned Hindi narrator or simply shooting landscapes, a good camera is always an asset.

Lighting is just as crucial as picking the camera you will employ for your project. When you are working on a documentary, you will sometimes find yourself in situations where you have little control over the lighting. When working on a story, you should have as much control over the lighting as possible. On the other hand, a competent documentary filmmaker might have a greater understanding of lighting and intuition for "identifying" the ideal lighting and angles for every shoot.

You want to employ lighting in narrative filmmaking to evoke emotions, express your characters, and draw the audience's attention to specific details. Altering the angle and capturing things from a different perspective can sometimes be as simple as changing the angle and utilizing the light from a window.

Using a DIY bounce board or a small LED light to touch up a face may subtly add modest lighting controls to enhance scenes and compositions. These tiny strategies can save you a lot of time in your narrative pieces by allowing you to focus on finding the light rather than trying to generate it.

The importance of audio is a valuable lesson we have learnt from documentary filmmaking that would undoubtedly transfer to the narrative. Always record from a variety of sources. You would think that this would be standard procedure for all sorts of film and video production. Still, we have been on enough corporate and narrative presentations to know that people often overlook audio.

However, as any excellent documentarian will tell you, recording audio in the field is always a struggle. When you just have one auditory source, you never feel right. For narrative, a boom mic is excellent, but for documentary, we advocate hiding a lapel or two on your actors or using another recording equipment close to the action. So, whether we need Tamil voice over artist for our documentary or a multi-language expert, ensuring sound clarity is of utmost importance.

Another trick we have used in documentary filmmaking that can be applied to short films or features is keeping the camera rolling. This results from documentary interviews or B-roll to capture those little extra moments that are typically much more raw and charming. You don't have to record continually; simply keeping it rolling for a few moments longer than usual may cause folks to relax once they realize they are no longer on camera.

In story scenarios, the same can be said. It is all about creating—or capturing—realism in your performances for good filming. Sometimes it is through the delivery of a line of language, but more often than not, it is through the expressions, emotions, and situations. You could be astonished at what you find if you can capture a few more of your performers in their natural states without the strain of performing.

Finally, as we go towards a daring new age of digital filmmaking, where DIY production and run-and-gun films can be filmed with minimum budgets and crews, many digital solutions can assist both documentary and narrative filmmakers.

Due to their nature, documentary and narrative film productions will always be separate. You will never be able to approach one like the other. If you come from a documentary background, you have many more tools at your disposal than you might imagine. And, if you are just getting started in film and video, documentaries might be a great way to get started. Voyzapp, the largest media marketplace in India, enables you to build a complete documentary or any other media at the click of a button!

The Most Popular Business Podcast of 2022

How to become a voice actor for animation or cartoon movies